Unique and Interesting Views of the A-H Player Organ 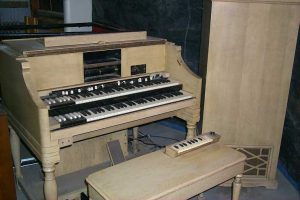 In the process of collecting almost 250 Aeolian/Hammond rolls I ended up buying three Aeolian/Hammond organs. The first instrument  was purchased from the  Music Museum in Traverse City, Michigan and has a blond finish on the console and Leslie speaker. It is a fairly late instrument having a serial number #9181.   Click HERE to view the gallery and descriptions.

The second Aeolian/Hammond was purchased in Billings Montana and is the more traditional brown finish. This instrument is serial number #9205 which I understand is 3 from the end of the line of 208 instruments produced. This instrument is unusual in that it has vibrato rather than the usual tremolo that Aeolian/Hammonds usually had. As to whether it was a factory modification since this was one of the last Aeolian/Hammonds made or was a modification made at a later date I don’t know. However, there are no mounting screws to indicate that the old style preamp was ever installed.  This is the instrument I intend to keep.

The third Aeolian/Hammond was purchased from the relatives of the long time Hammond Dealer in Salem, Oregon. This instrument had 230 rolls with it. This instrument is an early one with the serial number of #9151. Placement of many of the components is considerably different than the later versions. I find it interesting that such a small run over a rather short period would have the major modifications that these instruments show. The pictures should show the major changes which, while not earth shaking, are interesting.

The first set of pictures are the most complete and basically show most of the components of the Aeolian/Hammond. After that set will be some pictures of the early model Hammond BA. These can be compared with the first set to see the differences between the early and later versions.