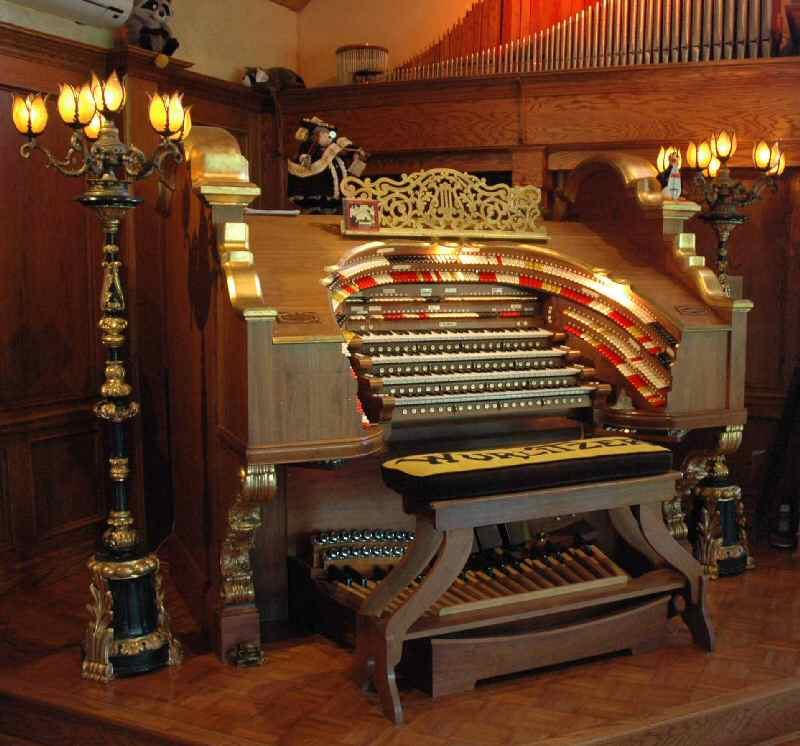 The Theatre Organ, one of the few truly American musical instruments, was originally designed to accompany silent films before the advent of sound motion pictures. From about 1920 to 1930 several thousand of these instruments were produced by several manufacturers, the most prominent being the Rudolph Wurlitzer Company of North Tonawanda, New York.

This particular instrument is what is called a hybrid Wurlitzer meaning that it is made up of parts from many different Wurlitzer theatre organs. The original instrument was from the Lyceum Theatre in Duluth, Minnesota. A major Southern California brush fire in 1978 all but decimated the pipe work from that instrument. Presently the organ contains pipe work from many instruments with the Philadelphia Mastbaum Theatre, the Chicago Avalon Theatre and the Los Angeles Metropolitan Theatre making up the largest portion.

The present instrument is the third organ installed in these premises. The first organ contained 26 ranks in three chambers and was mostly destroyed in the afore mentioned brush fire. The second organ consisted of 29 ranks with the same console as the first organ but with greater unification and boasted an all electronic Trousdale multiplex relay system. The present instrument is controlled by a new 4 manual Fox Special replica console built by Ken Crome, and consists of 52 ranks along with 32 channels of MIDI. The instrument has been designed to provide just about every voice that was included in the original specifications of both large and small theatre organs. In addition, 12 ranks from the 1925 Mormon Tabernacle Austin are installed along with the high pressure theatre ranks. The classical antiphonal division includes six of these ranks and is installed unenclosed above the console and Steinway grand piano on the south wall of the living room. This division, when played with the main organ on the north end of the room, results in a sound that must be described as all-encompassing and is truly unique for any California residence instrument. A Trumpet en Chamade completes this division both tonally and visually.

When this instrument was originally installed in the 1970’s it was one of the first residence organs to use a unique installation idea of double floored chambers. All pressure regulating and other related noise making equipment is installed on the lower level with a solid structural floor separating this area from the sound production area called the chambers. A theatre organ installed in this manner suffers far less noise problems related to putting one of these massive instruments, usually meant for theatres of from one to five thousand seats, in a private residence.

For years, this instrument was the largest theatre organ in a residence in the Western United States, and certainly one of the most versatile with its four manual console, 418 stop keys and 96 combination pistons. In addition, the MIDI voices add the equivalent of an additional 10 ranks and several percussions and are controlled by regular stop keys and combination action. Three sampled 32′ pedal extensions along with seven sampled 16′ extensions combine with six acoustic 16′ ranks to give a building shaking foundation to the organ. 800 watts of audio power is available for the pedal extensions and other sampled/synthesized voices. An extensive digital reverberation system, which gives a totally predictable and stable acoustic regardless of room occupancy, completes the electronic additions to the instrument.

The organ contained three thousand five hundred and twenty nine pipes in three divisions. Seven ranks extend through 2′. Included in the organ are eleven ranks of strings (thirteen if you count the Dulciana and Celeste), four ranks of Diapasons, ten ranks of orchestral reeds, six ranks of chorus reeds (including three Trumpets), four ranks of flutes and three ranks of Tibias and is powered by two blowers, one fifteen horsepower and one two horsepower.

Visibility of the organ and its internal parts, pipes and percussions was excellent due to Plexiglas swell shades. A leaded glass chamber door also facilitates viewing otherwise inaccessible portions of the organ. The lower level regulator rooms are easily entered to view the pressure regulating equipment. Maximum comfortable seating capacity is around 150.

In designing both the organ and its environment it was a constant compromise between the best organ installation technique and the visual aspect. Hopefully the over all result has proven successful. An organ this size rightfully does not belong in a residence but in a large theatre. It is hoped that someday this instrument will be installed intact in a large theatre where many thousands may experience and enjoy its truly unique sound.