To see more information on the organ and the gallery of pictures, click on the info text below.

Built in the 1920s to accompany silent movies, the theatre organ has survived many trials and tribulations to arrive in the 21st century as a viable instrument capable of playing most styles of music composed in the past one hundred years. 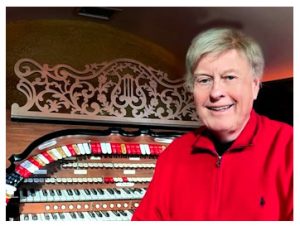 This particular Wurlitzer has had a rather checkered past:  It left the Wurlitzer factory on June 30, 1926, destined for the First Christian Church in Lakewood, Florida with Opus number 1379. It was a 3 manual 8 rank church organ with a 16” string. Unfortunately, for some reason, the organ was repossessed by Wurlitzer and the parts reused for other instruments. On January 26, 1929 the same Opus number was resold but with all new components.to the Calvary Undenominational Church in Grand Rapids, Michigan.

The organ was purchased from the people who removed it from the Grand Rapids church and installed it in their home not too far from Detroit.

<CLICK HERE to view the Gallery of the Henderson Wurlitzer>

The original 8 ranks consisted of:

7 ranks were added as was a toy counter, 6 tuned percussions and extended the Tuba to 16’ and the Tibia through 2’

A few interesting facts about the installation:

First, the organ is solar powered during daylight hours…the house has an 8.1 KWH solar generation capacity which is far more capacity than the 5 HP blower that operates the organ needs. It is certainly unusual to have an almost 100-year-old musical instrument being powered by solar energy

2. Due to the extreme weather conditions in the Las Vegas area, the organ blower is installed directly in front and below the swell shades in a concrete vault, so the wind system is completely closed. Not too surprising but when standing over the blower (and directly in front of the swell shades), which is about 7’ below, there is virtually no vibration or blower noise emulating form the floor…concrete is an excellent sound absorbent and insulator.

3. The manual chests are supported by a welded steel frame that is bolted to the concrete chamber wall and floor. All structural lumber is either original Wurlitzer or poplar milled to the correct dimensions.

4. All percussions and traps are hung from the chamber ceiling

5. The Plexiglas swell shades were made on site by John, Wes and Rolando using John’s design.